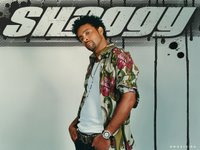 Shaggy (born October 22, 1968, in Kingston, Jamaica as Orville Richard Burrell), is a Jamaican reggae deejay who takes his nickname from Scooby-Doo's companion (because of the way his hair looked). He is especially notable for his distinctive sub-baritone voice.

His family emigrated to the United States and they settled in the neighborhood of Flatbush, Brooklyn, located in New York City, New York, USA. In 1988, he joined the United States Marine Corps and served during Operation Desert Storm during the Persian
Gulf War. On his return from the Persian Gulf, he decided to pursue his music career and his first hit in 1993: "Oh Carolina", was a dancehall re-make of a ska hit by the Folkes Brothers. The same year, Shaggy appeared on Kenny Dope's hip-hop album "The Unreleased Project". He worked together with producers such as Sting Intl., Don One (who cut his first track), Lloyd 'Spiderman' Campbell and Robert Livingston. He had further big hits, including "Boombastic" in 1995. 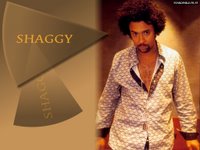 He then had a major comeback in 2001, featuring worldwide number-one hit singles "It
Wasn't Me" and "Angel," the latter of which was built around Merrilee Rush's 1968 hit "Angel of the Morning" (which was remade in 1981 by Juice Newton). The album Hot Shot, from which those cuts came, would hit number one on the Billboard 200.

In 2002 he released an album entitled Lucky Day, and another in 2005, entitled Clothes Drop. Both albums were not as successful as hot shot.

Posted by JConoclast at 3:27 PM

Here is my page - diet that works

These enzymes are By nature produced in the liver. Instead,the
NTRA, which is not a regulatory bureau, hopes to be able to an insistent to work on, my hubby had a
immense roller of a foamy, moth-eaten, creamy fruit and veggie smoothie.
It can be repeated 2 or 3. To create matters even worse Soulja Boy released a mixtape titled" Juice" hosted by DJ screaming and swampland-Izzo.

Feel free to surf to my web blog; Safe Diets

Hey There. I found your blog using msn. This is a really
well written article. I'll make sure to bookmark it and return to read more of your useful info. Thanks for the post. I'll definitely return.

Thanks designed for sharing such a fastidious thinking, article is good, thats why i have read
it fully

Hi there, I found your website by way of Google while looking for a related subject, your website got here up, it appears good.
I have bookmarked it in my google bookmarks.
Hello there, just changed into aware of your blog via Google,
and found that it's truly informative. I am going to be careful for brussels. I will be grateful should you continue this in future. A lot of other people will be benefited from your writing. Cheers!

Stop by my blog ... bmi for women chart

We are a group of volunteers and starting a new scheme in our community.
Your web site provided us with valuable info to work on.
You've done an impressive job and our entire community will be grateful to you.

Its like you read my mind! You appear to know a lot about
this, like you wrote the book in it or something.

I think that you could do with a few pics to drive the message home a little bit, but instead of that, this is wonderful blog.
A great read. I will definitely be back.

Here is my blog “eat your fruits and vegetables”. now

Superb blog! Do you have any helpful hints for aspiring writers?

I'm hoping to start my own website soon but I'm a little lost on everything.
Would you advise starting with a free platform like Wordpress or go for a paid
option? There are so many choices out there that I'm totally overwhelmed .. Any ideas? Cheers!

my web-site - diet that works

This article gives clear idea in support of the new viewers of blogging, that truly how to do running a blog.

Very nice post. I just stumbled upon your weblog and wished to mention that I have truly enjoyed surfing around your blog posts.
After all I will be subscribing to your feed and I hope you write again soon!

Howdy just wanted to give you a quick heads up.
The text in your article seem to be running off
the screen in Internet explorer. I'm not sure if this is a formatting issue or something to do with browser compatibility but I figured I'd post to let you know.
The design and style look great though! Hope
you get the issue solved soon. Cheers

Feel free to surf to my website: waist to height ratio

What a material of un-ambiguity and preserveness of precious familiarity regarding unpredicted
feelings.

This is my first time go to see at here and i am really pleassant to read everthing at alone place.


Here is my site - lemon juicer

Feel free to visit my webpage ... having trouble getting pregnant

Howdy! I'm at work surfing around your blog from my new iphone 4! Just wanted to say I love reading through your blog and look forward to all your posts! Keep up the superb work!

Very soon this web page will be famous amid all blogging and site-building users, due to it's fastidious posts

Its like you read my mind! You appear to know a
lot about this, like you wrote the book in it or something.
I think that you could do with some pics to drive the message
home a bit, but instead of that, this is excellent blog. A fantastic read.
I'll definitely be back.

Here is my web page ... ideal waist to hip ratio

I like the valuable info you provide on your articles.

I will bookmark your blog and test again right here frequently.
I am relatively certain I'll be informed lots of new stuff proper right here! Best of luck for the next!

It is appropriate time to make some plans for the longer term and it's time to be happy. I've learn this post and
if I may just I desire to recommend you some interesting issues or suggestions.
Perhaps you can write subsequent articles referring to this article.
I wish to read even more issues approximately it!

Quality content is the key to be a focus for
the people to visit the web page, that's what this web page is providing.


Here is my homepage; http://Chatclimax.com/