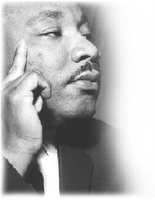 Reverend Dr. Martin Luther King and his wife visited Jamaica for 10 days in 1965. On Sunday June 20, 1965, Dr. King delivered an address before the graduating class at the University of the West Indies, Mona Campus, in Kingston, Jamaica:

He began by saying that he had never felt more at home anywhere else in the world adding, "In Jamaica I feel like a human being." He said he was proud to be among his "brothers and sisters on this wonderful island."

Several days later, at Ebenezer Baptist Church, Atlanta, Georgia, on 4 July 1965, here is what he said:

The other day Mrs. King and I spent about ten days down in Jamaica. I’d gone down to deliver the commencement address at the University of the West Indies. I always love to go that great island which I consider the most beautiful island in all the world. The government prevailed upon us to be their guests and spend some time and try to get a little rest while there on the speaking tour. And so for those days we traveled all over Jamaica. And over and over again I was impressed by one thing. Here you have people from many national backgrounds: Chinese, Indians, so-called Negroes, and you can just go down the line, Europeans, European and people from many, many nations. Do you know they all live there and they have a motto in Jamaica, "Out of many people, one people." And they say, "Here in Jamaica we are not Chinese, (Make it plain) we are not Japanese, we are not Indians, we are not Negroes, we are not Englishmen, we are not Canadians. But we are all one big family of Jamaicans." One day, here in America, I hope that we will see this and we will become one big family of Americans. Not white Americans, not black Americans, not Jewish or Gentile Americans, not Irish or Italian Americans, not Mexican Americans, not Puerto Rican Americans, but just Americans. One big family of Americans.

See you in Jamaica.
Posted by JConoclast at 7:02 PM