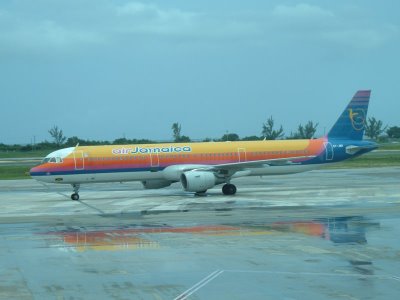 Air Jamaica is our national airline.

Air Jamaica was established in October 1968 and started operations on 1 April 1969, when it connected Kingston and Montego Bay, with New York and Miami. At that time the Jamaican government owned a substantial part of the airline, with Air Canada owning a minor share and providing technical, maintenance and logistical help. 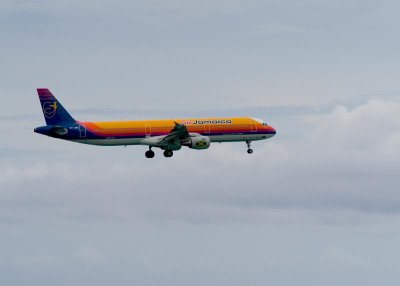 During the 1970s, Air Jamaica saw a huge expansion. Flights were added to Toronto and Montreal in Canada, to Luis Muñoz Marín International Airport in Puerto Rico, to Philadelphia and many other destinations, especially across the Caribbean. Long-haul services to Europe were started on 1 April 1974. Air Jamaica used Douglas DC-8s for a large part of the 1970s, but the Lockheed L-1011 Tristar and Boeing 727 jets became a part of the fleet towards the end of the decade when the government bought over Air Canada's small share. During the 1980s, growth slowed. Nevertheless, new routes were still opened, to Baltimore and Atlanta. 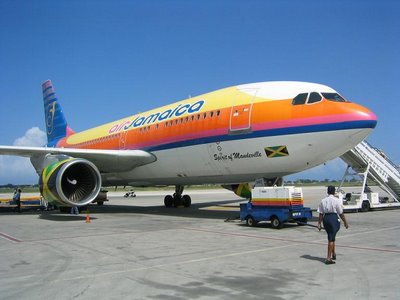 During the 1990s Air Jamaica continued to expand: the airline took over the Kingston-Nassau, Bahamas route, which had been left by British Airways, began a code sharing agreement with Delta Air Lines and opened routes to Sky Harbor International Airport in Phoenix (which was later dropped), and to Frankfurt, London, Manchester, Santo Domingo and Ft. Lauderdale. The route to Phoenix was opened because Air Jamaica was looking for expansion in the American West, beyond its route to Los Angeles. In 1994 the company was partially privatized, with the government retaining 25% of the company and giving 5% of it to the airline's employees. It started buying Airbus equipment, including the Airbus A340, and began a feeder service, a frequent flyer program (7th Heaven), and an inflight magazine, named SkyWritings. The airline also underwent a livery change during that decade. Air Jamaica has now opened a large operations base in Saint Lucia.

In December 2004, after massive financial losses, the government took back 100% control of Air Jamaica. It employs 3000 staff. See You in Jamaica.
Posted by JConoclast at 11:02 AM

Hi. Like traveling? Personally I do not like traveling by plane. It is rather dangerous and I feel sick in the plane. However, sometimes, I have to travel on business. And among all the airline companies I have had to deal with Air Jamaica is the most comfortable one. I did not happen to have a single problem with them. I happen to learn about the company on this great site www.pissedconsumer.com.

We are a group of volunteers and opening a new scheme in our community.
Your site offered us with useful information to work on.

You have done an impressive activity and our entire group shall be thankful to
you.

My web blog; diets That Work

Wow, superb blog format! How long have you been blogging for?
you make running a blog look easy. The total glance of your web site is fantastic,
as neatly as the content!

Hmm it looks like your website ate my first comment (it was super long) so I guess I'll just sum it up what I submitted and say, I'm thoroughly enjoying your blog.

I too am an aspiring blog blogger but I'm still new to everything. Do you have any helpful hints for first-time blog writers? I'd certainly appreciate it.


Also visit my homepage; how to get followers on instagram

Asking questions are actually nice thing if you are not understanding something entirely, however this paragraph presents nice understanding yet.

My family every time say that I am wasting my time here at net, except I know I am getting familiarity
every day by reading such fastidious content.

My partner and I absolutely love your blog and find
a lot of your post's to be just what I'm looking for.
Would you offer guest writers to write content available
for you? I wouldn't mind creating a post or elaborating on a few of the subjects you write related to here. Again, awesome blog!

Have you ever thought about creating an ebook or guest
authoring on other blogs? I have a blog based upon on the same topics you discuss and would really like to have you share some
stories/information. I know my audience would value your work.
If you're even remotely interested, feel free to send me an e-mail.

Your style is unique compared to other folks I've read stuff from. I appreciate you for posting when you have the opportunity, Guess I'll just book mark this site.


Here is my webpage: waist to height ratio chart

Hi there, You have done a fantastic job. I will definitely digg it and personally suggest to my friends.
I'm sure they'll be benefited from this web site.