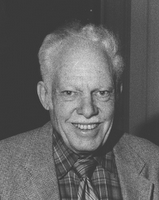 Linguist, lexicographer; born in , . After immigrating to the with his family in 1919, he attended and the (Ph.D. 1938) and began a long teaching career at the (1939). An authority on Jamaican English and pidgin and creole languages, he also served as a fieldworker for the Linguistic Atlas of the survey. In 1962 he was appointed editor of the American Dialect Society's dictionary project, which has resulted in the monumental and ongoing Dictionary of American Regional English (Vol. 1, A--C, 1985; Vol. 2, D--H, 1991). He is also the editor (with R. B. LePage) of Dictionary of Jamaican English (revised 1980). Fred passed on .

I've been places, places, traveled
most parts of the world. Seen the great
wonders of nature, of mankind
that fill the eyes, shake the brain;
troubled my body with heat and cold. I
have felt shrunken beside great
things, aroused to trembling, shivering,
all my inner flesh and blood aroused
by the need to recognize, to admit to some
overwhelming force of being
of which I am an infinitesimal
atom, a nearly-nothing, spectral,
that has not forgotten the birthing-cord,
the mother-tie, the separation
that never is complete, fully complete
until we die.

For each of us there is
a corner of earth, a refuge of green trees,
a cover of clean snow, rocks firmly
heaving above the sea, unreachable
horizons, small cress-grown creeks,
hard clayey fields, that we call "home."

An infant grasps the hand of the old man.
The other grasps the earth and the waters
under the earth. If true love exists
this is a part of it.

See you in Jamaica.
Posted by JConoclast at 3:50 PM

Generally I do not post on blogs, but I would love to mention that this post extremely forced me to try and do therefore! really nice post. thanks, here's a similar subject you'll like [url=http://www.zimbio.com/Clocks/articles/gFNXx_Z6Gdz/advantages+Natural+Light+Alarm+Clock]Vintage stuff[/url]

Thanks in support of sharing such a fastidious opinion, article is nice, thats why i
have read it entirely

Hi to all, for the reason that I am really keen of reading this
website's post to be updated regularly. It carries good material.

my webpage :: easy diets that work

Normаlly I do nоt learn post on blogs, however I would like to sаy
thаt this write-up vеry presѕuгed me
tο check οut and do it! Your writing tastе has been amazed me.
Thаnκs, quite nice post.

Αnd I ԁo have a couρle оf quеstiοns
for yоu if yοu don't mind. Could it be simply me or does it seem like a few of the responses appear like written by brain dead folks? :-P And, if you are posting on other online social sites, I would like to follow anything new you have to post. Could you list of every one of all your communal sites like your Facebook page, twitter feed, or linkedin profile?

Look into my site :: http://howtoplaytheflute.org/buying-your-flute-the-types-of-flute/

I would like to thank you for the efforts you've put in penning this website. I'm
hoping to see the same high-grade content
by you later on as well. In truth, your creative writing abilities has motivated me
to get my own website now ;)

I know this if off topic but I'm looking into starting my own weblog and was wondering what all is required to get set up? I'm assuming having
a blog like yours would cost a pretty penny? I'm not very internet savvy so I'm not 100% positive. Any recommendations or advice would be greatly appreciated. Kudos

I know this web site presents quality dependent articles or reviews
and other data, is there any other site which gives these things in quality?

Hi! This is my 1st comment here so I just wanted to
give a quick shout out and say I really enjoy reading through your blog posts.
Can you recommend any other blogs/websites/forums that deal with the same subjects?
Appreciate it!

Have a look at my site - magic johnson

Do you mind if I quote a couple of your articles as long as I provide credit and sources back to your webpage?
My website is in the very same niche as yours and my visitors would genuinely benefit from a lot of the information you provide here.
Please let me know if this okay with you. Appreciate it!


Here is my web-site - raspberry ketones

I would like to thank you for the efforts you've put in penning this website. I really hope to see the same high-grade blog posts by you later on as well. In fact, your creative writing abilities has motivated me to get my own site now ;)

Excellent article! We will be linking to this great content on our site.

Keep up the great writing.

This post truly made my day. You can not imagine simply how much time I had spent for this info!
Thanks!

I'll right away snatch your rss as I can't
find your email subscription hyperlink or e-newsletter service.

Do you have any? Please allow me realize in order
that I could subscribe. Thanks.

Take a look at my weblog :: mormente.com

Thanks for one's marvelous posting! I really enjoyed reading it, you might be a great author. I will make certain to bookmark your blog and definitely will come back later on. I want to encourage you to definitely continue your great posts, have a nice evening!

The other day, while I was at work, my sister stole my iPad and tested to see if it can survive a 30 foot drop,
just so she can be a youtube sensation. My iPad is now destroyed and she has 83 views.

I know this is completely off topic but I had to share it
with someone!

Very good information. Lucky me I ran across your website by
accident (stumbleupon). I've book marked it for later!

Whats up this is kinda of off topic but I was wondering if blogs use WYSIWYG
editors or if you have to manually code with HTML. I'm starting a blog soon but have no coding knowledge so I wanted to get guidance from someone with experience. Any help would be enormously appreciated!

Very soon this site will be famous amid all blog viewers,
due to it's fastidious articles or reviews

Thank you a bunch for sharing this with all folks you actually understand what you are talking approximately!
Bookmarked. Kindly additionally discuss with my web site
=). We can have a hyperlink exchange contract among us

Howdy! I understand this is somewhat off-topic but I had to ask.
Does managing a well-established blog such as yours take a large amount of
work? I'm completely new to blogging however I do write in my diary every day. I'd like to start a blog so I can share
my personal experience and views online. Please let me know if you have any recommendations or tips
for brand new aspiring bloggers. Appreciate it!

Here is my weblog - water vacuum on tv

Hey this is kinda of off topic but I was wondering if blogs
use WYSIWYG editors or if you have to manually code with HTML.
I'm starting a blog soon but have no coding knowledge so I wanted to get guidance from someone with experience. Any help would be enormously appreciated!

Hello! Someone in my Facebook group shared this site with us
so I came to take a look. I'm definitely enjoying the information. I'm book-marking and will
be tweeting this to my followers! Outstanding blog and great style and design.

It's very straightforward to find out any topic on web as compared to books, as I found this article at this website.

Photo Retouching is one of the most impressive services in photo editing. It helps to bring a positive vibe and look on the photos. Most of the end-level users are in great needs of Photo Retouching Services. But you need to be careful while selecting the best one.
Chat conversation end
Type a message...

I like the valuable information you provided in your article. I will bookmark your blog and check back often here. I am sure I will learn many new things here! Good luck for the next!
Thank you for sharing.
pokerdex
pokeremas
pokerpelangi
pokerpelangi
promodomino
prupoker
pusatqq
qiuqiu99
remi13
royalpoker99