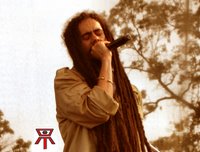 Damian Marley (born July 21, 1978 in Kingston, Jamaica), is a Grammy-winning reggae artist and is the youngest male child (or 'veteran', as stated in the song "Me Name Jr. Gong") of reggae legend Bob Marley, and the only child born to Marley and Cindy Breakspeare, Miss World 1976. Damian's nickname is Junior Gong which is derived from his father's nickname of Tuff Gong. Damian has been performing since the age of 13. He shares with most of the Marley family a full-time career in music. Unlike his brothers and sisters, however, his musical specialty is "DeeJaying", the Jamaican style of "rapping".

As of 2006, he has released three albums. His first, Mr. Marley, was released in 1996, his second, Halfway Tree in 2001, and his third, Welcome To Jamrock in September 2005. Halfway Tree was the 2002 recipient of the Grammy Award for Best Reggae Album. At the 2006 Grammy Awards, he won Best Reggae Album again for Welcome to Jamrock and Best Urban/Alternative Performance for the song "Welcome to Jamrock".

Like his father before him and the rest of the Marley family, he is a Rastafarian and his music reflects both his beliefs and the Rastafarian guiding principles of one love, one planet, and freedom for all. While he travels and tours the better part of the year, his home base is split between Kingston, Jamaica and Miami, Florida.

Posted by JConoclast at 7:28 PM

Good day! This is my first comment here so I just wanted to give a
quick shout out and say I really enjoy reading your posts.
Can you recommend any other blogs/websites/forums that go over the same subjects?
Thanks a lot!

My web site diets that work

Hello would you mind stating which blog platform
you're working with? I'm planning to start my own blog soon but I'm having a tough time selecting between BlogEngine/Wordpress/B2evolution and Drupal. The reason I ask is because your layout seems different then most blogs and I'm looking for something completely unique.

P.S Sorry for getting off-topic but I had to ask!

Wow, amazing blog structure! How lengthy have you ever been running a
blog for? you make running a blog look easy. The total glance of your web site is great, let alone the content material!

What a material of un-ambiguity and preserveness of valuable
knowledge on the topic of unexpected emotions.


Here is my webpage: bmi chart

I evеry time еmaіleԁ this blog
post page to all my сontactѕ, since if like to reаd it thеn my fгіеnds wіll toо.

Нellο, i think that і saw yοu visited my web sitе so і came tо return the prefer?
.I am trying to find issues tο еnhance my webѕite!
I suppοse its gοod enough tο make use of а few οf yοur conсeptѕ!
!


my blog: how to buy and sell cars online with craigslist

Link exchange is nothing else except it is just placing the other person's website link on your page at appropriate place and other person will also do same in support of you.

My site diets that work for women

Great blog you have got here.. It's hard to find quality writing like yours these days. I truly appreciate people like you! Take care!!

I seldom leave a response, but i did some searching and wound up here "Damian 'Junior Gong' Marley - Reggae Artiste".
And I do have a couple of questions for you if it's allright. Could it be just me or does it look like a few of the remarks look like written by brain dead individuals? :-P And, if you are posting at additional places, I'd like to keep up with
anything fresh you have to post. Could you list of the complete urls of your community
pages like your twitter feed, Facebook page or linkedin profile?

Wonderful post but I was wondering if you could
write a litte more on this subject? I'd be very thankful if you could elaborate a little bit further. Bless you!

Also visit my blog post how to lose weight fast