Powell is the second Jamaican to win this prestigious award, following in the footsteps of Merlene Ottey, who did same in 1990.
And Chinese star Liu Xiang won the award for the performance of the year for his stunning world record breaking 12.88sec in the 110m hurdles at . 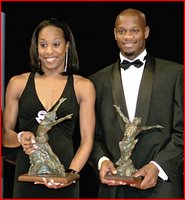 Ethiopian Meseret Defar took the women's best performance honours for breaking the 5,000m world record in .
Powell and Richards were also given a cheque for US$100,000 each.

Their victories were hardly surprising as the pair both went unbeaten throughout the season and shared the Golden League jackpot with American 400m runner Jeremy Wariner.

Powell twice equalled his own 100m record mark of 9.77sec, which he shares with drugs-tainted American Olympic champion Justin Gatlin, who may yet be stripped of his share of the record.
Richards took 15 straight victories at 400m and broke the 22-year-old American record with 48.70sec to become the seventh fastest woman of all time.

"Last year I wanted to win this title, but I didn't because I got injured," said Powell.
Only Liu, who is preparing for the Asian Games, was not in to accept his award.
Other prize winners were 's 's Stefka Kostadinova and Czech's Jan Zelezny with distinguished career awards, 's Margus Hunt won the rising star award and Woldemeskel Kostre of won the coaches award.

Previous World Athletes of the Year

I know this web site provides quality based articles or reviews and extra
information, is there any other web site which gives such things in quality?
My website : massage philadelphia center city

This page definitely has all of the information and facts I needed concerning this subject
and didn't know who to ask.

Hey I know this is off topic but I was wondering if you
knew of any widgets I could add to my blog that automatically tweet my newest
twitter updates. I've been looking for a plug-in like this for quite some time and was hoping maybe you would have some experience with something like this. Please let me know if you run into anything. I truly enjoy reading your blog and I look forward to your new updates.

Check out my blog post :: diets that work for women
Also see my page > diet that works

You really make it appear so easy with your
presentation however I to find this matter to be really one thing that I think I'd never understand. It kind of feels too complicated and extremely large for me. I am looking ahead on your subsequent post, I will try to get the dangle of it!

Heya i am for the first time here. I found this board and I find It
really useful & it helped me out a lot. I hope to give something back
and aid others like you helped me.

Have a look at my homepage: best registry cleaner

Hello! This post couldn't be written any better! Reading this post reminds me of my old room mate! He always kept talking about this. I will forward this page to him. Fairly certain he will have a good read. Thank you for sharing!

Check out my weblog ... how many calories do you burn walking