Introduction and History of Jamaica 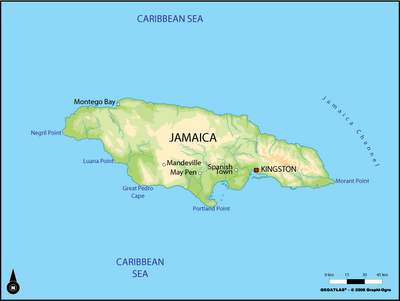 In 1655, Spain lost Jamaica to Britain. The Arawak Indians were later replaced with West Africans, who were transported under torturous conditions via slave ships, and were forced to work under the harshest conditions as slaves. What started out as tobacco plantations later transformed into sugar cane plantations, and it stayed that way until slavery ended in August 1, 1838. After slavery ended, Jamaica remained under British rule until August 6, 1962 when it became independent. Between 1838 and 1962, a lot of indentured workers were brought to Jamaica from China, India, Europe, and India. Many of these workers remained in Jamaica after their employment contracts ended. Here lies the origin of our Motto, ‘Out of Many, One People’. A free and independent Jamaica would rise from nothing to show the world our greatness. Since then, we have shared with the world many of our great and remarkable people (from Mary Seacole to Marcus Garvey, from Bob Marley to Michael Manley), and have welcomed millions (as visitors) to our great and beautiful institution (country).

In Jamaica we are aware that we are citizens of the world. So while our first love is Jamaica, we fearlessly roam the world, and we hardly conform to man-made rules that are designed to prevent us from doing so. We are a Christian Institution so we are not always very tolerant of un-Christ-like conduct. We hate unfair practices and injustice and we believe all humankind are equal. It is in our DNA to be who we are, so we are hardly followers. We are still a part of the British Commonwealth, but we don’t bow to so-called kings or queens. For us, the only king or queen is God. But we love all people and all places and we look forward to see you one day in Jamaica. But if you can't make it, one of us will find you. That is a guarantee.

Jamaica is located in the Greater Antilles, 240 kilometres (150 mi) in length and 85 kilometres (50 mi) in width. It is situated in the Caribbean Sea. It is 635 kilometres (391 mi) east of the Central American mainland, 150 kilometres (93 mi) south of Cuba, and 180 kilometres (112 mi) west of the island of Hispaniola, on which Haiti and the Dominican Republic are situated. It is the third most populous Anglophone (someone who speaks English natively or by adoption) country in the Americas, after the United States and Canada.

Before God and All mankind.
I pledge the love and loyalty of my hear
The wisdom and courage of my mind,
The strength and vigour of my body
in the service of my fellow citizens.
I promise to stand up for justice,
Brotherhood and Peace, to work diligently and creatively,
To think generously and honestly, so that,
Jamaica may, under God, increase in beauty, fellowship
and prosperity, and play her part in advancing the welfare
of the whole human race.

Jamaica is more than a country. It is a revered institution.
See You in Jamaica.
Posted by JConoclast at 9:58 AM

Hello, for all time i used to check web site posts here in
the early hours in the daylight, since i enjoy to gain knowledge of more and more.

It is perfect time to make some plans for the future and it's time to be happy. I've read this post and if I could I
wish to suggest you some interesting things or advice.
Perhaps you could write next articles referring to this article.
I desire to read even more things about it!

This is the perfect website for anyone who wishes to find out about this topic.
You realize a whole lot its almost hard to argue with you (not that I actually would want to…HaHa).
You certainly put a brand new spin on a subject
that has been discussed for many years. Great stuff,
just excellent!

Take a look at my web-site Diets that Work

Appreciating the time and energy you put into your blog and detailed information you provide.
It's nice to come across a blog every once in a while that isn't the same out of date rehashed
information. Fantastic read! I've bookmarked your site and I'm adding your RSS feeds to my Google account.

Thanks for some other wonderful article. Where else may just anyone
get that kind of information in such a perfect manner of writing?
I have a presentation next week, and I am at the look for such information.

oZzy moved away earlier, I miss his cock, that i'm always hungry for sex.
FUCK MY PUSSY!

Hi everyone, it's my first go to see at this web site, and paragraph is truly fruitful designed for me, keep up posting such articles.

Its like you read my mind! You seem to know a lot about this, like you wrote the
book in it or something. I think that you can do with some pics to drive the message home a bit, but other than that, this is fantastic
blog. A great read. I will certainly be back.

What's Going down i'm new to this, I stumbled upon this
I have discovered It absolutely useful and it has aided me out loads.
I hope to give a contribution & assist different
customers like its aided me. Good job.

eToro is the ultimate forex broker for rookie and professional traders.