Garth Fagan is a modern dance choreographer. Born in in 1940, Garth Fagan studied dance in with Martha Graham, Jose Limon and Alvin Ailey. Fagan credits Pearl Primus as a major influence on his work as well. Fagan is the founder and Artistic Director of Garth Fagan Dance, a modern dance company based in . The company, originally named Bottom of the Bucket - But Dance Theatre, was established in 1970.

Fagan won a Tony Award for best choreography in 1998 for The Lion King. His work for Lion King also received the Drama Desk Award and the Outer Critics Circle Award that same year.

Fagan is a Distinguished University Professor at the State University of New York at Brockport. In 1989 he received a Guggenheim Fellowship. 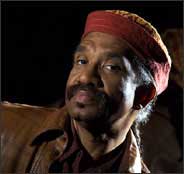 See you in Jamaica.
Posted by JConoclast at 4:13 PM

There are actually various titles attached to this type of job.
Indeed, the best schools produce the best physical therapists in the country, so it is every aspiring therapist.
The treatments and care an RT provides to these patients would be drug and oxygen administration to the
lungs which may also call for cardiopulmonary resuscitation.
my webpage: treatment of clinical depression in men

You can certainly see your enthusiasm in the work you write.
The arena hopes for even more passionate writers like you who
aren't afraid to say how they believe. Always follow your heart.

Hi colleagues, its wonderful paragraph about cultureand entirely defined,
keep it up all the time.

My blog :: how to get lot of followers on instagram

Hey there, I think your blog might be having browser compatibility
issues. When I look at your blog site in Chrome,
it looks fine but when opening in Internet Explorer, it has some overlapping.
I just wanted to give you a quick heads up! Other then that, awesome blog!


Take a look at my site - bmi charts

Hey! I just noticed one other message in another
blog that regarded like this. How do you know all these items?
That’s one cool post.

Check out my site: why am i not getting pregnant