David Nesta "Ziggy" Marley (born , 's ) is a Jamaican musician, the oldest son of Rita and Bob Marley, the legendary roots rock reggae singer. He learned how to play guitar and drums from his father. His mother Rita called and baptized him David, but his father Bob nicknamed him "Ziggy" in reference to a big spliff.

In 1979, Ziggy and his siblings, Cedella, Stephen and Sharon, made their recording debut with their father, "Children Playing in the Streets." The Melody Makers, as the group came to be known, played occasionally for several years, including at their father's funeral in 1981. Their debut LP was Play the Game Right, which was a very pop-oriented album, earning Ziggy some derision from critics. The band's label, EMI, wanted to market Ziggy as a solo act, and so the Melody Makers moved to Virgin Records, where they recorded Conscious Party (1988, produced by Chris Frantz and Tina Weymouth). The album was critically and popularly successful, as was One Bright Day (1989) and Jahmekya (1991). 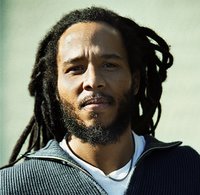 As the 1990s continued, the Melody Makers' sales slowly declined, beginning with Joy and Blues (1993), Free Like We Want to Be (1995). Ziggy had become politically active by this time, working with the United Nations and creating a record label called Ghetto Youths Crew. A solo album, Dragonfly was released on .

He voiced a Rasta jellyfish in the 2004 film Shark Tale, and also collaborated with Sean Paul on a cover of his father's song "Three Little Birds" for the soundtrack. The cover was the title song for the film, although gained less exposure than "Car Wash" by Christina Aguilera and Missy Elliott possibly due to not being released as a single. 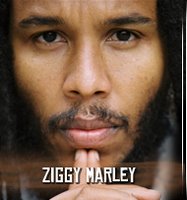 Ziggy also sang the theme song for the popular PBS children's show "Arthur". In addition to his work in 2004 he also decided to marry a VP at , with whom he has a daughter. Ziggy also was mentioned in an episode of The Fresh Prince of Bel-Air.

See you in Jamaica.
Posted by JConoclast at 1:58 PM

Awesome blog you have here but I was curious if you knew of any user discussion forums that cover the same topics talked
about in this article? I'd really like to be a part of group where I can get opinions from other knowledgeable individuals that share the same interest. If you have any recommendations, please let me know. Many thanks!

Here is my webpage ... originalno

Quality posts is the key to attract the viewers
to go to see the site, that's what this web site is providing.

Feel free to visit my blog post :: diets that work for women

Highly energetic blog, I liked that bit. Will there be
a part 2?

Feel free to surf to my website :: articles
my web site: link

Yes! Finally something about prosecutor.


Feel free to surf to my website bmi for women chart

I am regular reader, how are you everybody? This post posted at
this web page is really pleasant.

Feel free to surf to my site ... healthy diet plans

Ahaa, its good dialogue about this article at this place at this website, I have read
all that, so now me also commenting at this place.

Definitely imagine that that you said. Your favorite reason
seemed to be on the web the simplest thing to be mindful of.
I say to you, I definitely get irked while other people consider issues that they just do
not recognise about. You controlled to hit the nail upon the top and also
outlined out the entire thing without having side effect , folks can take a signal.
Will probably be back to get more. Thanks

Feel free to surf to my website; how much should i weigh