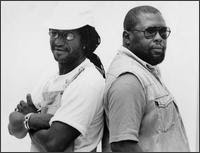 No matter how advanced drum machine technology gets, reggae at its most genuine will always be characterized by at least one core element: a real live flesh-and-blood drums and bass team. Sly Dunbar and Robbie Shakespeare have been called the greatest such team in reggae, while their skills have carried them well beyond the reggae realm. It seems forever that they've been identified as a duo, but they'd both honed their respective chops prior to their first mid-'70s teaming. Dunbar had expanded the parameters of reggae drumming in sessions at Channel One studio. Shakespeare's resume included work with Jack Ruby's Black Disciples. After hearing and quickly coming to appreciate each other's playing, they cemented a partnership that's been 30 years long and is still strong.

Sly and Robbie's near-perfect steadiness is embellished by their own characteristic touches, including Shakespeare's subtly penetrating tones at key rhythmic moments and Dunbar's on-and-off-the-beat accents. Whatever the secret, their playing has graced the music of more reggae stars than you can shake a spliff at. Besides extended stints as the studio and touring rhythm section for Peter Tosh and Black Uhuru, Sly and Robbie have laid it down for Bunny Wailer, Gregory Isaacs, Sugar Minott, Dennis Brown, John Holt, Culture, the Mighty Diamonds, Horace Andy, Judy Mowatt, Yellowman and countless others.

Additionally, the volume of work they took on and the rewards reaped from it enabled them to start their own label, Taxi Productions, which came to be seen as a kind of Jamaican equivalent of Motown. With Taxi, Sly and Robbie were able to boost the profiles of such promising hit-makers as the Tamlins, Jimmy Riley and Ini Kamoze.

As much as they did for reggae, it didn't take long for the rest of the music world to take notice of the "Riddim Twins'" expertise. Bob Dylan, Mick Jagger, Herbie Hancock, Joe Cocker, Grace Jones, Carly Simon and others have enlisted the pair's services. And they've put out releases under their own name where the reggae beat was nowhere to be found, including the funk/hip-hop-leaning albums Language Barrier and Rhythm Killers. When dancehall replaced roots reggae as Jamaica's dominant sound, Sly and Robbie were on the cutting edge of that genre's programmed grooves, producing monster hits like Chaka Demus and Pliers' "Murder She Wrote." Keeping one foot in reggae and the other ever-willing to explore, Sly and Robbie continue to rule the drums and bass roost.

See You in Jamaica
Posted by JConoclast at 8:30 AM

Did you [url=http://www.onlinecasinos.gd]roulette[/url] sympathize with that you can on Revolving Mom realm estate at once from your mobile? We be in pressure a je sais quoi pocket-sized casino within reach an touchiness to iPhone, iPad, Android, Blackberry, Windows 7 and Smartphone users. Pilfer your gaming with you and be a safe keeping wardress [url=http://www.avi.vg]buy adult toys[/url] wherever you go.

I really like it whenever people come together and share thoughts.
Great site, continue the good work!

Hi there, I check your blog regularly. Your humoristic style is witty,
keep up the good work!

Hi! This is kind of off topic but I need some guidance from an established
blog. Is it difficult to set up your own blog?

I'm not very techincal but I can figure things out pretty quick. I'm thinking about creating my
own but I'm not sure where to start. Do you have any ideas or suggestions? With thanks

Hello! Do you know if they make any plugins to assist with SEO?

I'm trying to get my blog to rank for some targeted keywords but I'm not seeing very good results.
If you know of any please share. Cheers!

Inspiring story there. What happened after? Thanks!

I have to thank you for the efforts you have put in writing this website.

I am hoping to see the same high-grade content by
you later on as well. In fact, your creative writing abilities has inspired me to get my own, personal blog now ;)

Here is my homepage :: diet plans

Hello, i read your blog occasionally and i own a similar one and
i was just curious if you get a lot of spam remarks? If so how
do you reduce it, any plugin or anything you can advise?
I get so much lately it's driving me mad so any support is very much appreciated.

Thank you for some other wonderful post. Where else may just anybody get that kind of info in such an ideal approach
of writing? I've a presentation next week, and I'm on the look for such information.

Have a look at my page: Graduate Certificates Online

It's very trouble-free to find out any matter on web as compared to books, as I found this post at this website.

Hey there! I just wanted to ask if you ever have any problems with hackers?
My last blog (wordpress) was hacked and I ended
up losing months of hard work due to no
backup. Do you have any methods to protect against hackers?

my web-site ... tips on how To lose weight fast

There's a lot of folks that I think would really appreciate your content. Please let me know. Many thanks