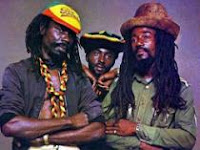 In terms of his commitments to a strictly-roots outlook, an unwavering belief in Africa as a true homeland and upholding the iconic status of Marcus Garvey, Culture's Joseph Hill ranks with Winston Rodney (Burning Spear) as one of foundational reggae's mightiest spokesmen.

Though he's among reggae's most recognizable voices, Hill began as a percussionist in the Soul Defenders, one of the in-house bands at Clement Dodd's famed Studio One. It was also there that he took his first steps as a vocalist, singing lead on "Take Me Girl" (under the name the Neptunes) and the repatriation anthem "Behold The Land."

Hill's cousin Albert Walker proposed the idea of forming a full-fledged vocal trio, and with Kenneth Dayes and Walker harmonizing behind Hill's eloquently urgent leads, Culture (briefly known as the African Disciples) was born. Their initial tracks were laid at the studio of Joe Gibbs, who produced their early singles and their landmark 1977 debut LP Two Sevens Clash. That album, with its militant/spiritual air and rock solid consciousness, ranks alongside works from the same era by Bob Marley, Burning Spear, Israel Vibration and the Mighty Diamonds as a defining moment in the Rasta/reggae connection. After two more albums with Gibbs, the group moved on to Sonia Pottinger's High Note label, cutting such enduringly crucial discs as Harder Than The Rest and Cumbolo.

The trio went its separate ways in the early '80s, with Hill releasing Lion Rock under the Culture name. They were back together in full force by 1986, and subsequent albums like Culture at Work, 'Nuff Crisis and Wings Of A Dove brimmed with the same strengths as the early years: percolating riddims, heartfelt songs (penned mostly by Hill) and robust harmonies. Dayes left in 1993 and was eventually replaced by Telford Nelson. That one personnel change aside, Culture has remained a constant in reggae. Their albums have been released and/or re-released by various labels (Shanachie, RAS, Heartbeat, etc.), but any Culture disc is sure to be loaded with unwavering Jamaican roots vibes. A couple of recent in-concert offerings (Cultural Livity and Live In Africa) showcase the group's onstage muscle, and their latest studio album, 2003's timely World Peace, has them sounding as blazingly righteous as ever.

See You in Jamaica
Posted by JConoclast at 8:09 AM

No doubt Joseph Hill and Culture have left their mark as one the most crucial roots reggae artists of all time.
Joseph Hill, R.I.P.

Hey I know this is off topic but I was wondering if you knew of any widgets I could add to my blog that automatically tweet my newest twitter updates.
I've been looking for a plug-in like this for quite some time and was hoping maybe you would have some experience with something like this. Please let me know if you run into anything. I truly enjoy reading your blog and I look forward to your new updates.

It's really a great and useful piece of information. I'm satisfied that you simply
shared this useful information with us. Please stay us informed like this.
Thank you for sharing.

my web-site :: How Much Should I Weigh Chart

you're in point of fact a just right webmaster. The website loading velocity is amazing. It sort of feels that you are doing any distinctive trick. Furthermore, The contents are masterwork. you've done a
great activity on this topic!

Hi friends, good post and fastidious arguments commented here, I am really
enjoying by these.

Here is my webpage :: bankruptcy florida

Thanks , I have just been searching for information approximately this subject
for a long time and yours is the best I have came
upon till now. But, what about the conclusion? Are you positive about
the supply?

Here is my web-site - any dicount for quantrim

Simply wish to say your article is as astounding.
The clarity in your post is just spectacular and i can assume you are an expert
on this subject. Fine with your permission let me to grab your feed to keep
up to date with forthcoming post. Thanks a million
and please carry on the rewarding work.

Currently it seems like Wordpress is the best blogging platform available right now.
(from what I've read) Is that what you are using on your blog?

Look into my site ... Graduate certificate

I have read so many articles or reviews about the blogger
lovers however this post is truly a nice
article, keep it up.

Feel free to surf to my website ... healthy diet plans

This piece of writing will assist the internet users for building up
new web site or even a weblog from start to end.

Take a look at my weblog; healthy diet plans

I'm gone to inform my little brother, that he should also visit this webpage on regular basis to take updated from most recent news.

Thanks in favor of sharing such a good thinking,
article is fastidious, thats why i have read it
completely

It's awesome in support of me to have a website, which is helpful for my knowledge. thanks admin

Check out my blog bmr calculator for women

You ought to take part in a contest for one of the most useful
blogs on the net. I'm going to highly recommend this blog!

Its like you read my mind! You seem to know a lot about this, like you wrote the book in it or something.
I think that you could do with some pics to drive the message home a little bit, but other than that,
this is excellent blog. A fantastic read. I'll definitely be back.

You can certainly see your skills within the article you write.
The sector hopes for even more passionate writers
like you who aren't afraid to say how they believe. All the time follow your heart.

Here is my web site: bmi calculator for women

I'm really loving the theme/design of your blog. Do you ever run into any internet browser compatibility issues? A number of my blog visitors have complained about my website not operating correctly in Explorer but looks great in Chrome. Do you have any recommendations to help fix this problem?

my page diet plans For Women

If you desire to improve your experience just keep visiting this website and be updated with the latest gossip
posted here.

Here is my homepage - Raspberry Ketone Plus Diet

Please let me know if you're looking for a author for your blog. You have some really good articles and I believe I would be a good asset. If you ever want to take some of the load off, I'd really like to write some content for your blog in
exchange for a link back to mine. Please shoot me an e-mail
if interested. Cheers!

An outstanding share! I've just forwarded this onto a coworker who was conducting a little research on this. And he in fact ordered me lunch due to the fact that I stumbled upon it for him... lol. So allow me to reword this.... Thank YOU for the meal!! But yeah, thanx for spending time to talk about this matter here on your web site.

Here is my web blog; diet plans for women to lose weight

When someone writes an article he/she retains the thought of a user in his/her mind that how
a user can be aware of it. Thus that's why this paragraph is amazing. Thanks!

Have a look at my weblog: http://www.jessicaskids.com/?q...

Its like you read my mind! You appear to know a lot about this, like you wrote the book in it
or something. I think that you could do with a few pics to drive the message home a little
bit, but other than that, this is wonderful blog. A fantastic read.

I'll certainly be back.

Can I simply just say what a relief to uncover a person that really
understands what they're talking about on the net. You certainly realize how to bring a problem to light and make it important. A lot more people must check this out and understand this side of the story. I can't believe you aren't more popular since you most certainly have the gift.

Here is my webpage Muscle build

Hi there would you mind stating which blog platform you're working with? I'm planning to start my own
blog in the near future but I'm having a tough time deciding between BlogEngine/Wordpress/B2evolution and Drupal. The reason I ask is because your design seems different then most blogs and I'm looking for something completely unique.
P.S Sorry for getting off-topic but I had to ask!