Black Uhuru, formed by Derrick "Duckie" Simpson, is a Jamaican reggae band probably best known for their hits "Shine Eye Gal", "Guess Who's Coming to Dinner," "Sinsemilla," "Solidarity," and Grammy Winner "What Is Life?". They were the first group to win a Grammy in the reggae category when it was introduced in 1985. They originally formed as 'Black Sounds Uhro' (the Swahili word for freedom).[1]

The first line-up of the group was Garth Dennis, Don Carlos, and Derrick "Duckie" Simpson. The group has undergone several lineup changes: Carlos left, replaced by Michael Rose; then Dennis left to play with The Wailing Souls, and was replaced by Errol Nelson. During this early period, the band's most famous recording is the album entitled Love Crisis, later rereleased as Black Sounds Of Freedom. In 1979 the group was joined by Sandra "Puma" Jones, a social worker from North Carolina, USA. Under this lineup, (Rose, Simpson and Jones), with Sly & Robbie as producers (and also permanently employed on drum and bass), they released the band's most popular albums: Sinsemilla, Red, Chill Out, and the Grammy-winning Anthem[1], as well as others. During this period, Black Uhuru became one of the most popular reggae groups in the world, regularly touring with the likes of The Police and The Rolling Stones. Live 1984 (a concert at the Rockpalast in Germany, but was actually recorded on October 18, 1981) captures the band at the height of its powers. 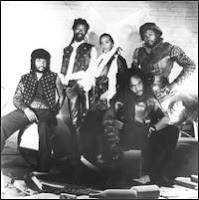 After Rose went solo in 1985, Junior Reid joined for a few records and also left; Puma Jones left in 1987 (and died of cancer three years later, in 1990). In 1990, Simpson reunited with Dennis and Carlos in the original line-up of the group. They recorded several albums and toured extensively. By the end of the 90s, Dennis and Carlos left the band and fought a legal battle against Simpson over the name&rights of Black Uhuru. Simpson won the lawsuit and formed yet another incarnation of Black Uhuru with Andrew Bees as lead singer. Only one album, Dynasty, was released before Bees went back to pursue his solo career.

In February 2004, it was announced in the Jamaican press that Simpson and Michael Rose had re-united under the name "Black Uhuru feat. Michael Rose". Together with a female backing singer named Kay Starr, they released a single, "Dollars" and performed at several concerts including "Western Consciousness 2004" on April 28 in Jamaica, of which a live video was released shortly thereafter. A new album has been reported to be in progress.They are also currently Touring Europe 2006.

See You in Jamaica
Posted by JConoclast at 3:12 PM

Good way of explaining, and fastidious post to take
data concerning my presentation focus, which i am going to deliver in institution of higher education.

I'm really enjoying the theme/design of your website. Do you ever run into any internet browser compatibility issues? A few of my blog readers have complained about my website not working correctly in Explorer but looks great in Opera. Do you have any advice to help fix this problem?

My web page: diets that work fast for women

I
do not know whether it's just me or if
everybody else encountering issues with your
website. It appears like some of the written text within your posts are
running off the screen. Can someone else please provide
feedback and let me know if this is happening to them as well? This might be a issue with my browser
because I've had this happen before. Appreciate it

This is really interesting, You're a very skilled blogger. I have joined your feed and look forward to seeking more of your fantastic post. Also, I've shared your web site in my social networks!

When I originally commented I seem to have clicked on the -Notify me when new
comments are added- checkbox and now each time a comment is added I receive 4 emails
with the exact same comment. There has to be a means you
can remove me from that service? Thank you!

Hello there! Would you mind if I share your blog with my myspace group?
There's a lot of folks that I think would really appreciate your content. Please let me know. Thank you