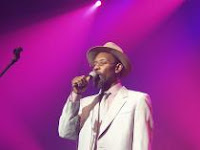 One of the great artists to emerge from the British reggae explosion of the late '70s was Linton Kwesi Johnson, who combined dialect-heavy spoken word with a heavy roots reggae backing band to pioneer a style called "dub poetry." Johnson differed from other members of the dub poetry movement, such as Oku Onuora and Mutabaruka, in that his laser-sharp diatribes are usually focused on his adopted country of England, and that he eschews Rastafarianism.

Born in 1952 in the rural Jamaican village of Chapelton, Johnson learned to read from his grandmother's bible. At the age of 11, he followed his mother to Brixton in London, where he learned about racism first-hand from white Britons' backlash against the increasing number of West Indian immigrants.

Johnson joined the Black Panther party while still in school and was also influenced by the revolutionary recordings of the Last Poets. Johnson's early albums from the late '70s and early '80s—Dread, Beat an' Blood, Forces Of Victory and especially 1980's Bass Culture—each furthered his reputation as a major voice in reggae. But Johnson began withdrawing from the touring circuit by the early '80s, appearing only occasionally at poetry readings and festivals, and he stopped recording for a few years as well. Making History (1984) was a strong return, but LKJ then disappeared again until the early '90s, when he re-emerged for the occasional tour. He has recorded sporadically since then, with 1999's More Time and 2005's Live in Paris.

Back when Johnson first started publishing and performing his poems in the 1970s, he was denounced for corrupting the youth and undermining the "purity" of the English language with his patois grammar and spelling. But now he's earning honorary degrees and gaining widespread respect. In a recent poll to determine the top 100 Black Britons of all time, he was ranked #22, and with the publication of Mi Revalueshanary Fren, he's become only the second living poet ever to be included in Penguin Books' Modern Classics series.

See You in Jamaica
Posted by JConoclast at 8:05 AM

Incredible quest there. What occurred after? Thanks!

After looking at a number of the blog posts
on your web site, I seriously like your technique of blogging.
I book-marked it to my bookmark site list and will be checking back in the near future.
Please check out my web site too and tell me what you think.

Fine way of explaining, and good post to take information about
my presentation subject, which i am going to deliver in university.


my web-site how to file for bankruptcy in florida

Hey! Do you use Twitter? I'd like to follow you if that would be ok. I'm absolutely enjoying your blog and look forward to new updates.

This is really interesting, You're a very skilled blogger. I've joined your rss feed and look forward to seeking more of your wonderful post.
Also, I have shared your website in my social networks!

I simply couldn't go away your web site prior to suggesting that I actually enjoyed the standard info a person supply on your visitors? Is going to be back ceaselessly to investigate cross-check new posts

Also visit my web-site ... how much should you weigh

I'll right away snatch your rss feed as I can not in finding your email subscription link or newsletter service. Do you've any?
Kindly permit me know in order that I could subscribe.
Thanks.

You really make it seem really easy with your presentation but
I to find this matter to be actually something
that I feel I might by no means understand. It
seems too complicated and very huge for me. I'm looking forward in your next post, I will try to get the grasp of it!

You really make it seem really easy with your presentation
but I to find this matter to be actually something that I feel I might
by no means understand. It seems too complicated and
very huge for me. I'm looking forward in your next post, I will try to get the grasp of it!

Here is my weblog: how much should i weigh

Hey! This is kind of off topic but I need some help from an established blog.
Is it tough to set up your own blog? I'm not very techincal but I can figure things out pretty fast. I'm thinking about setting up my own but I'm not sure where to start. Do you have any points or suggestions? With thanks

Also visit my page - How Much Should I Weigh