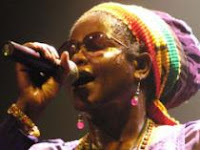 Known as the "Black Cinderella" and "Mother Culture," Sister Carol has led the way for women in reggae. Her music is rich with cultural heritage and infused with a vital social consciousness that permeates every aspect of life in the '90s. Many were introduced to Sister Carol through Jonathan Demme's films Something Wild and Married to the Mob, but her greatest strength is her music — music that carries a social message for people all over the world. There are no books in this musical classroom; learning comes through listening to the teacher. Who knew that the dancehall scene of NYC in the '70s would lead Sister Carol to a path of movies, albums, television appearances and a Grammy nomination for her highly regarded release Lyrically Potent.

See You in Jamaica
Posted by JConoclast at 8:07 AM

Look into my site - registry cleaner

Spot on with this write-up, I honestly feel this site needs a lot more attention.
I'll probably be back again to read more, thanks for the advice!

Hello Dear, are you truly visiting this web site regularly, if so then you will
definitely obtain fastidious knowledge.

Here is my web-site - best diet plan for women

Hey are using Wordpress for your site platform? I'm new to the blog world but I'm trying to get started and set up my own.
Do you require any html coding knowledge to make your
own blog? Any help would be greatly appreciated!

Here is my site :: good diet plans for women

Hey there! I simply want to give you a big thumbs up
for your great information you have here on this
post. I'll be coming back to your web site for more soon.

Look into my web blog :: what should i weigh for my height

What you said made a lot of sense. But, think on this, what if you
were to create a killer title? I mean, I don't want to tell you how to run your blog, but suppose you added something to possibly grab people's attention?

I mean "Sister Carol - Reggae Artiste" is kinda boring.
You should glance at Yahoo's front page and note how they write post headlines to get viewers interested. You might add a related video or a pic or two to grab people interested about what you've written.

Just my opinion, it could make your website a little bit more interesting.

Thank you for another excellent post. The place else may anyone get that type of info in such an
ideal approach of writing? I have a presentation next week, and I'm at the look for such info.

Hello there! This is kind of off topic but I need some help from an
established blog. Is it very hard to set up your own blog?
I'm not very techincal but I can figure things out pretty quick. I'm thinking about creating my own but
I'm not sure where to begin. Do you have any points or suggestions? Cheers

Link exchange is nothing else but it is simply placing the
other person's webpage link on your page at proper place and other person will also do same in support of you.

Here is my page ... the Diet Patch

Hello there! Do you know if they make any plugins to safeguard against hackers?
I'm kinda paranoid about losing everything I've worked hard on.
Any suggestions?

Hi my friend! I wish to say that this article is amazing, great written and include approximately all significant
infos. I'd like to look more posts like this .

my page Slim Lipo Plus

Today, I went to the beach front with my kids.
I found a sea shell and gave it to my 4 year old daughter and said "You can hear the ocean if you put this to your ear." She put the shell to
her ear and screamed. There was a hermit crab inside and it pinched her ear.
She never wants to go back! LoL I know this is totally off topic but I had
to tell someone!

I blog frequently and I genuinely appreciate your information.
The article has truly peaked my interest. I am going to book mark your site and keep checking for new information about once a week.
I opted in for your RSS feed too.

Hi there, I check your new stuff like every week.
Your writing style is witty, keep up the good work!

Feel free to surf to my webpage ... Best Diet Patch