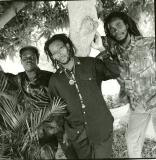 The reggae road is littered with the bodies of fallen vocal groups that contributed a couple of tunes or an album of note and then disappeared into the history books. But the Mighty Diamonds have persevered, the original trio lineup still intact, having logged some 40-plus albums during a career well into its fourth decade. Their close, soulful harmony sound, offered via both sweet, passionate love songs and conscious political and spiritual material, provided a template that countless others have followed.

Donald "Tabby" Shaw, Fitzroy "Bunny" Simpson and Lloyd " Judge" Ferguson first came together in 1969 in Kingston's Trenchtown ghetto. Inspired by America's Motown sound, they recorded a number of unsuccessful singles for various producers before racking up their first local hit with "Shame And Pride" for Jah Lloyd. It wasn't until they discovered the emerging Channel One studio in 1975, however, that the Mighty Diamonds became a genre-shaping force in reggae. With Sly Dunbar and Robbie Shakespeare's Revolutionaries behind them, the Mighty Diamonds established their presence with early R&B-flavored romantic hits such as "Hey Girl" and "Country Living," as well as the more lyrically aggressive "Back Weh A Mafia" and "Right Time."

That latter track also provided the title of their first release for Virgin, recognized as one of the all-time classic reggae vocal albums. The best songs on 1976's Right Time, among them "I Need A Roof," "Them Never Love Poor Marcus," "Africa" and the aforementioned "Right Time," placed the Mighty Diamonds in the pantheon of reggae's most outspoken roots artists, their often militant words belied by their refined, charming vocal harmonies.

Right Time made international stars out of the Mighty Diamonds, and they recorded their next album, Ice On Fire, in New Orleans, using the legendary R&B producer Allen Toussaint. They returned to Channel One for their next few albums, Stand Up For Your Judgement, Planet Earth and Deeper Roots. By the early '80s, the group was gone from Virgin and began releasing music on their own Bad Gong label and for other sundry companies. A 1981 single, "Pass The Kouchie," was covered by the British group Musical Youth, who took the ganja references out, retitled it "Pass The Dutchie" and took it to the Top 10 in America.

The Mighty Diamonds have continued to record and tour in the decades since their initial splash (although many of their classic albums are out of print, replaced by poor-sounding, ill-conceived compilations), and while they are no longer considered a front-line group, their past impact is undeniable.

See You in Jamaica
Posted by JConoclast at 8:11 AM

Yes! Finally someone writes about insect.
My website bovada

Lastly, you should know that the online therapist finder is really appropriate.

You got to get hold of the best professional therapist in
town who can help you to fine tune and perfect your personality traits and bolster your confidence level
to new high. The school or university should have what is called the
Commission on Accreditation in Physical Therapy Education
(CAPTE).
My website: http://niwiqaa.insanejournal.com

I like the helpful information you provide in your articles.

I will bookmark your blog and check again here frequently.

I'm quite sure I will learn many new stuff right here! Good luck for the next!

Take a look at my weblog home hemorrhoid treatment

Woah! I'm really digging the template/theme of this site. It's simple, yet effective.

A lot of times it's tough to get that "perfect balance" between usability and appearance. I must say you've done a excellent job
with this. In addition, the blog loads super fast
for me on Opera. Outstanding Blog!

Have a look at my blog post ... diet plans For women to lose weight fast for free

Awesome blog! Do you have any hints for aspiring writers? I'm planning to start my own site soon but I'm
a little lost on everything. Would you advise starting
with a free platform like Wordpress or go for a paid option?
There are so many options out there that I'm totally confused .. Any ideas? Appreciate it!

my weblog; diet that works

I really like your blog.. very nice colors & theme. Did you design this website yourself or did you hire someone to do it for you?
Plz reply as I'm looking to construct my own blog and would like to know where u got this from. kudos

What's up to all, how is the whole thing, I think every one is getting more from this site, and your views are fastidious in favor of new people.

Feel free to surf to my weblog bankruptcy florida

Simply want to say your article is as amazing.
The clarity in your post is simply excellent and i could assume you are
an expert on this subject. Fine with your permission allow me to grab your RSS feed to keep updated with forthcoming post.
Thanks a million and please carry on the rewarding work.

Hello, i think that i saw you visited my web site thus i came to “return the favor”.

I'm attempting to find things to improve my site!I suppose its ok to use a few of your ideas!!

It's really a nice and useful piece of info. I am happy that you just shared this helpful information with us. Please stay us informed like this. Thank you for sharing.

Hey! This post couldn't be written any better! Reading through this post reminds me of my good old room mate! He always kept chatting about this. I will forward this page to him. Fairly certain he will have a good read. Many thanks for sharing!

Having read this I thought it was very informative. I appreciate you spending some time and effort to put this
informative article together. I once again find myself personally spending a
lot of time both reading and leaving comments. But so what, it was still worth it!

Also visit my site how many calories do you burn walking

Attractive section of content. I just stumbled upon
your weblog and in accession capital to assert that I acquire in fact enjoyed account your blog posts.
Any way I'll be subscribing to your feeds and even I achievement you access consistently quickly.

I was recommended this website by way of my cousin.
I'm no longer positive whether or not this submit is written through him as nobody else realize such unique approximately my difficulty. You're wonderful!
Thanks!