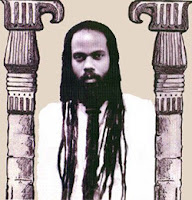 Maroghini, whose name means optical illusion, is a multi-talented Jamaican reggae artist who has played and taught his profession in over 40 countries in the world, including the Carribbean, North, South and Central America, Europe, Asia, The Middle East and Africa. He is a premier percussionist, and has been initiated a master of the great art of African and Indian drumming in several Ancient rites.

Maroghini has a number of LPs, CDs, and Videos to his credit. Most of these are signed to major recording companies such as EMI Toshiba and a few independent labels.

Maroghini is Jamaican but his father, Modupe, was born in Nigeria, West Africa. Maroghini speaks German, French, English, and Jamaicanese fluently and can entertain light conversation in West African Wolof. He grew up in a family of musicians. His debut began at an early age, having received his first drum on his third birthday. It was his mother, a prominent music educator who taught him the rudiments of music. As a youngster he started learning the rhythms and instruments of the different afro-jamaican art forms. He became profoundly immersed in the spiritual aspect of drumming. Years later he studied pharmacology at the University Of Technology in Kingston, Jamaica but switched to studying at the Edna Manley College Of The Visual And Performing Arts in Kingston, after deciding that music and not chemotherapy was the panacea for the world. Through studies at the college he got a profound practical training with a theoretical foundation. He left the school with a strong desire for more. As his website states, "It was the starting point of a unique odyssey in search of the roots of the African Art of drumming, which eventually led him to the honoured corridors of spiritual house Africa where he underwent profound training in the esoteric art of drumming." The study of local rhythms there also introduced Maroghini profoundly to West African history. He also pursued studies in Latin percussion and Indian drumming in Europe. He spent years studying Farukhabad gharana tablas under masters from the far east.

Maroghini is a former lecturer at the Folkwang University (Folkwang Hochscule) in Essen, Germany, and a percussionist for reggae legend Jimmy Cliff.

Maroghini has also done numerous studio recordings as percussionist for a long list of musicians a few of which include Ziggy Marley, Robby Shakespear of Sly and Robby fame, Sizzla, Beres Hammond, Morgan Heritage, Richard Brownie of singer Shaggy's band and countless other Jamaican and international musicians. He has opened for groups such as Julio Iglesias, Boys 2 Men, Ice T, Sean Paul and a host of others.

Maroghini is well known for his extensive facial hair. His beard, according to some sources, hangs almost to the ground, but is usally braided tight and tucked inside his shirt.

Posted by JConoclast at 6:07 AM

Oh my goodness! Incredible article dude!
Thank you, However I am having troubles with your RSS.
I don't know the reason why I am unable to join it. Is there anyone else getting similar RSS problems? Anybody who knows the answer can you kindly respond? Thanks!!

Also visit my web page :: diets that work for women

Hey! Would you mind if I share your blog with
my twitter group? There's a lot of folks that I think would really appreciate your content. Please let me know. Thank you

Thanks for ones marvelous posting! I actually enjoyed reading it, you might be a great author.
I will be sure to bookmark your blog and will come
back in the foreseeable future. I want to encourage that you continue your great posts,
have a nice day!

Feel free to visit my website :: how to file bankruptcy in florida

I have been surfing online more than three hours today, yet I never found any interesting article like yours.
It is pretty worth enough for me. Personally, if all webmasters and bloggers made good
content as you did, the internet will be much more useful than ever before.

magnificent issues altogether, you simply gained a new reader.
What might you suggest about your put up that you simply made a few days ago?
Any sure?

With over 30 years of specialisation in seamless flooring, Flawless Flooring has managed to satisfy the different and unique requirements
of every customer. Despite the fact that it uses concrete, an
unfriendly environmental material, it has a few advantages over tires and
shares most of the earthship advantages. And when we would cut for the plumbing work,
I had to patch around that and make it solid.

If you experience some emotional or physical problems in your life it can soon be seen in the condition of your hair,
using natural and organic products aids in
the recovery of your hair. Likewise, using imported shampoos
and conditioners from a tropical country when your climate is cold
and temperate is not such a good idea. A well
groomed woman will look to her hair and makeup first and a poll of 3,000 females
across the UK revealed that about 44% feel attractive if they are having a good hair day, this compares to 16%
who felt pleased with their appearance if good teeth gave them
that winning smile.

I every time spent my half an hour to read this weblog's articles or reviews all the time along with a cup of coffee.

In contrast, the non-organic gardener is more likely to use chemically
created fertilizers. Due to the popularity of organic gardening, organic potting soil and
compost are available at most garden centers.

Grab a few bags of organic potting soil and lean them
up against the sunny side of your garage or a brick
wall of your home.

Here is my homepage :: breathy

Hello there! I could have sworn I've been to this site before but after browsing through some of the post I realized it's new
to me. Anyhow, I'm definitely glad I found it and I'll be book-marking and checking
back often!

Feel free to surf to my weblog ... waist height ratio

I don't even know how I ended up here, but I thought this post was great. I do not know who you are but certainly you're going to a famous blogger if you aren't already ;) Cheers!

magnificent put up, very informative. I ponder why
the other experts of this sector don't realize this. You must continue your writing. I am confident, you've
a great readers' base already!

I really like your blog.. very nice colors & theme.
Did you create this website yourself or did you hire someone to do it for
you? Plz reply as I'm looking to create my own blog and would like to know where u got this from. appreciate it

You actually make it seem so easy together with your presentation but I
in finding this matter to be really something which I think I
would by no means understand. It sort of feels too complex and very
huge for me. I'm having a look ahead for your next submit, I will attempt to get the hold of it!

Hi! I could have sworn I've visited this site before but after looking at a few of the articles I realized it's new to me.
Anyhow, I'm definitely delighted I came across it and I'll be book-marking it
and checking back often!

It's very effortless to find out any matter on web as compared to books, as I found this post at this web site.

Also visit my homepage - as seen on tv

Heya i am for the first time here. I found this board and I find It really useful & it
helped me out much. I hope to give something back and aid others like you aided me.


Stop by my weblog; http://www.mobypicture.com/

I do consider all of the concepts you have introduced to your post.
They're really convincing and will certainly work. Nonetheless, the posts are very brief for novices. Could you please lengthen them a bit from subsequent time? Thank you for the post.

Here is my web blog; http://www.wagjournal.com/blogs/user/StephenKno