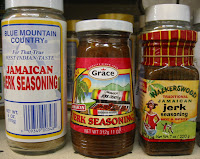 Jerk is a style of cooking native to Jamaica in which meats (traditionally pork, but now including chicken, fish, beef and even tofu) are dry-rubbed with a fiery spice mixture called Jamaican jerk spice. This jerk seasoning typically relies upon two items: allspice (Jamaican pepper, Jamaican Pimento) and Scotch Bonnet peppers (among the hottest peppers on the Scoville scale). Cloves, cinnamon, cianna, todd, nutmeg, thyme, garlic and other ingredients are often added. Traditionally, the meat is wrapped in banana leaves and cooked in an earth covered pit over smoldering green pimento wood (that is, the wood of the allspice tree). A grill over an open fire will suffice for a modern rendition, and pre-made jerk seasoning mixes are available.

This method of cooking dates back to the Carib-Arawak Indians who inhabited Jamaica. After capturing an animal and thoroughly cleaning and gutting it, the Indians placed it in a deep pit lined with stones and covered with green wood, which, when burned, would smoke heavily and add to the flavor. But first, the carcass was "jerked" with a sharp object to make holes, which were stuffed with a variety of locally available spices.

Jerking has evolved over time from pit fires to old oil barrel halves as the container of choice. In about the 1960's, Jamaican entrepreneurs sought to recreate the smoked pit flavor, and relatively quickly came up with a solution. The solution was to cut oil barrels lengthwise and attach hinges, drilling several ventilation holes for the smoke. These barrels are often heated by layers of charcoal, which some say lends itself to making the burnt smokey taste. One often encounters street-side "jerk stands" in Jamaica and nearby Cayman Islands, where, often for a very reasonable price, one can purchase smoked meat. This is often chicken, however, pork is sometimes cooked. Often as a side, Hard Dough or Jamaican fried dumpling is served. The starches in the breads lend themselves to counteract the powerful spice of the jerk.

It is often debated around jerk stands about which chef's secret recipe of spices and herbs makes the best Jerk seasoning. Each chef makes his or hers different, and it is well worth the time to sample each chef at least once.

Visit Jamaica and taste Jamaican Jerk spice for yourself.

Posted by JConoclast at 5:48 AM

I've been surfing online more than 4 hours today, yet I never found any interesting article like yours. It's pretty worth enough for me.
Personally, if all webmasters and bloggers made good content as you did, the web will be a lot more useful than ever before.

I do agree with all of the concepts you have offered for your post.
They're very convincing and can certainly work. Nonetheless, the posts are very quick for starters. Could you please lengthen them a bit from subsequent time? Thank you for the post.

Feel free to visit my page: diet plans for women to lose weight

bookmarked!!, I love your site!

Hi! Someone in my Myspace group shared this website with us so
I came to take a look. I'm definitely enjoying the information. I'm book-marking and
will be tweeting this to my followers! Outstanding blog and brilliant style and design.


Here is my page; Green coffee reviews Description: Some people even assist and consume cabbage milk with other vegetables improve its functionality its flavor. When coffee beans will most certainly be roasted chlorogenic acid rests down. Assess out their website on behalf of tips and supplies. In the US