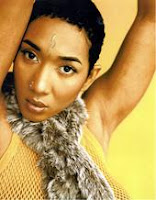 After making an appearance on the Notorious B.I.G.'s 1994 song "Respect" on his album 'Ready to Die', she scored a recording contract with Sony Music. King's first single "Shy Guy", from the album Tougher Than Love, was a hit, reaching #13 on the Billboard Hot 100 and being certified gold by the RIAA in the U.S.; the single also hit number 2 in the UK, as well as reaching No.1 on the Euro Hot 100 chart going on to sell nearly three million singles worldwide. The song was featured on the soundtrack of the film Bad Boys.

In 1997, her album Think Like a Girl entered Billboard's Top Reggae Albums chart at No.1. She also reached's Hot 100's Top 40 with her cover version of the song "I Say a Little Prayer", which was featured in the soundtrack to the film My Best Friend's Wedding. She was also featured on the 1997 soundtrack to the documentary When We Were Kings, where she performed a duet of the same title with Brian McKnight. In 1998 she joined Celine Dion and Brownstone on stage to perform their hit "Treat Her Like a Lady" at the Essence Awards, in which they received a standing ovation. That year she also appeared on Soul Train, The RuPaul Show, and VIBE to promote Think Like a Girl. 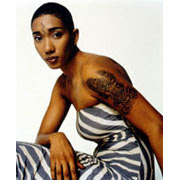 By the new millennium, King was in negotiations with Madonna's, Maverick Records label. In 2002 King released her third album Respect, it became a hit overseas, but was never released in the U.S., despite its first single "Summer Breezin'" receiving BET and VH1 video and radio airplay.

Posted by JConoclast at 8:24 AM

Appreciating the persistence you put into your website and detailed information you
offer. It's great to come across a blog every once in a while that isn't the same old rehashed information.
Great read! I've saved your site and I'm including your RSS feeds to my Google account.
Feel free to visit my site ... wedding stickers

At this time it seems like Drupal is the top blogging platform available
right now. (from what I've read) Is that what you are using on your blog?

Good day! I just would like to offer you a
huge thumbs up for your excellent info you've got right here on this post. I'll be returning to your web site for
more soon.

It's an amazing article for all the online users; they will get benefit from it I am sure.

my webpage - how to get lot of followers on instagram

Pretty section of content. I just stumbled upon your blog and in accession capital to assert that I get in fact enjoyed account your
blog posts. Anyway I'll be subscribing to your feeds and even I achievement you access consistently fast.

Pretty section of content. I just stumbled upon your blog and in accession capital to assert that I get
in fact enjoyed account your blog posts. Anyway I'll be subscribing to your feeds and even I achievement you access consistently fast.

Hi to every one, as I am truly eager of reading
this website's post to be updated regularly. It includes nice information.

Visit my web site how many calories do you burn walking

After I initially commented I appear to have clicked on the -Notify me when new comments are added- checkbox and now every time a comment is added I get four emails with the same comment.
Is there a means you can remove me from that service? Appreciate it!

Attractive section of content. I just stumbled upon your site and in accession capital to assert that I get actually enjoyed account your blog posts.
Any way I'll be subscribing to your augment and even I achievement you access consistently fast.

Hey! Do you use Twitter? I'd like to follow you if that would be ok. I'm definitely enjoying your blog and look
forward to new posts.

Very nice post. I just stumbled upon your weblog and wished
to say that I have truly enjoyed surfing
around your blog posts. In any case I'll be subscribing to your rss feed and I hope you write again soon!

Feel free to visit my homepage ... diet plans for women

I read this paragraph fully regarding the difference of most
recent and preceding technologies, it's remarkable article.

My page - how much should i weigh

Great blog! Do you have any tips for aspiring
writers? I'm planning to start my own blog soon but I'm a little lost on everything.
Would you advise starting with a free platform like Wordpress or go for a paid option?
There are so many options out there that I'm totally confused .. Any suggestions? Cheers!

Review my web site how much should i weigh chart

Way cool! Some extremely valid points! I appreciate you writing this write-up
plus the rest of the website is also very good.

Check out my page: best diet

Hello to all, it's actually a pleasant for me to pay a quick visit this web site, it consists of helpful Information.

Hi there, I found your website by means of Google even as searching for a comparable topic,
your web site came up, it looks good. I have bookmarked it in my google
bookmarks.
Hi there, just turned into alert to your blog via Google, and located that it's really informative. I'm gonna watch out for brussels.
I'll appreciate if you continue this in future. Many people can be benefited out of your writing. Cheers!

I was suggested this blog by my cousin. I am not sure whether this post is written by him as no one else
know such detailed about my trouble. You are wonderful!
Thanks!

Fantastic blog! Do you have any tips and hints for aspiring
writers? I'm planning to start my own blog soon but I'm a little lost on everything.
Would you recommend starting with a free platform like Wordpress or go
for a paid option? There are so many options out there
that I'm completely confused .. Any ideas? Kudos!

Here is my web-site: ketone diet

Do you have a spam problem on this website; I also am a blogger,
and I was wondering your situation; we have developed some nice practices and we are looking to trade methods with
others, why not shoot me an e-mail if interested.

Pretty! This has been an extremely wonderful article. Thanks
for providing this info.

Simply desire to say your article is as astounding.

The clearness on your publish is simply cool and i could think
you are an expert in this subject. Well with your permission let
me to clutch your feed to keep updated with forthcoming post.
Thank you a million and please carry on the gratifying work.

Ahaa, its good dialogue about this piece of writing
here at this blog, I have read all that, so at this time me also commenting at this
place.

Feel free to surf to my web site - diet that Works

Pretty! This is really good article. Thanks
for providing this jamaican information.

My site on:
apartamento baqueira

Hi Administrator,
This is very good article for online users. Thank you for provide this information. Its really impressive. please keep posting like that.

well, this is my site digital media

you may visit and can share your opinion with us.

Brilliant Post.
its really nice article for us.
Thanks for the hard work. it's a great blog site.

Thanks for sharing this information. I really like this post.
watch latest telugu full movies online free