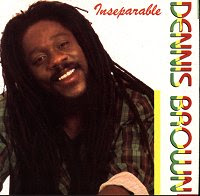 Dennis Emanuel Brown (February 1, 1957 – July 1, 1999) was a Jamaican reggae singer. He was one of the pioneer in the lovers rock style of reggae, and with 78 albums to his name was one of the most prolific names in the business. Honoured with the title "Crown Prince of Reggae" by the great Bob Marley, Brown was regarded by many as reggae's greatest singer after Marley.

Brown's first recording was "Lips of Wine" recorded for Derrick Harriott (The Musical Chariot), but this was not released initially. He then recorded for the legendary Coxsone Dodd at Studio One and, and Dodd released Brown's first single, "No Man is an Island". Dennis Brown recorded two albums for Dodd, No Man is an Island and If I Follow my Heart, the title track of which was penned by another Jamaican singing legend Alton Ellis. At about this time, Brown recorded further material for other producers such as Lloyd Daley the Matador ("Baby Don't Do It" and "Things in Life") and recorded more material for Derrick Hariott which eventually saw release as the Super Reggae and Soul Hits album. He also worked for Earl Hayles and the Charmaine label (named after his Hayle's wife) early in his career. In 1977 he had a Top 10 hit in the United Kingdom. This led to his contract with A&M Records, and starting his own label, DEB records. DEB records produced a number of hits, including many by Junior Delgado.

His first smash hit was "Money In My Pocket" on the Joe Gibbs label, and by the late 1970s, working for various producers, Brown had recorded and performed chart toppers such as "Sitting & Watching", "Wolves and Leopards", "Here I Come" & "Revolution", many featuring Sly and Robbie as the rhythm section.

As the dancehall era of the 1980s arrived, "Emmanuel" maintained his relevance within Jamaican music, frequently recording with King Jammy and Gussie Clark. By the time of his death in 1999, he had recorded over seventy five albums. Brown was such a prolific recording artist, with many labels and producers. His peak years are generally considered to be the 1970s, the compilation album 'The Prime of Dennis Brown' is a good showcase of his mid-70's period. The albums 'Visions' and 'Wolf and Leopard' are also classics and essential in the collections of fans of 1970s reggae. However, the 1980s showed Brown's enduring appeal, notably with "Sitting and Watching", "The Promised Land" and "Revolution", songs that are the equal of his 70's golden years.

According to some sources, Brown became addicted to crack cocaine, which affected his career and may have lead to his premature death. Jamaican Prime Minister P. J. Patterson and opposition leader Edward Seaga of the Jamaica Labour Party both spoke at Brown's funeral, which was held on July 17, 1999 in Kingston, Jamaica. The service, which lasted for three hours, also featured live performances by Maxi Priest, Shaggy, and five of Brown's sons. Brown was then buried at Kingston's National Heroes Park.

Posted by JConoclast at 6:22 AM

I'm really impressed with your writing abilities as well as with the layout to your weblog. Is that this a paid subject matter or did you customize it your self? Either way keep up the nice high quality writing, it is rare to see a nice weblog like this one nowadays..

Feel free to surf to my weblog :: airplane game

I'm impressed, I have to admit. Rarely do I encounter a blog that's equally educative and interesting, and let me tell
you, you've hit the nail on the head. The issue is something not enough folks are speaking intelligently about. Now i'm very
happy that I came across this in my search for something relating
to this.

Greetings I am so delighted I found your weblog, I really found you by
accident, while I was browsing on Yahoo for something else, Regardless I am here now and would just like to say
kudos for a fantastic post and a all round exciting blog (I also love the theme/design),
I don't have time to browse it all at the minute but I have book-marked it and also included your RSS feeds, so when I have time I will be back to read much more, Please do keep up the superb job.

Here is my weblog diets that work fast for women

Everyone loves it when individuals come together and share opinions.
Great blog, keep it up!

my web page - diet plans that work
my page: diets that work fast

It's awesome for me to have a web page, which is helpful in support of my knowledge. thanks admin

Check out my web site ... Http://Safedietplans.Com

I was suggested this website through my cousin. I am no longer certain whether this put up is written via him as no one else realize such special about my problem.

Hey! This is my 1st comment here so I just wanted to give a quick
shout out and tell you I truly enjoy reading through your posts.

Can you suggest any other blogs/websites/forums that go over the same topics?
Thanks a lot!

I know this if off topic but I'm looking into starting my own blog and was wondering what all is needed to get setup? I'm assuming having a
blog like yours would cost a pretty penny? I'm not very internet smart so I'm not
100% positive. Any recommendations or advice would be greatly appreciated. Cheers

Here is my webpage; how much should i weigh

I really love your blog.. Excellent colors & theme. Did you make this amazing site
yourself? Please reply back as I'm attempting to create my own personal site and would love to learn where you got this from or just what the theme is called. Many thanks!

Feel free to surf to my website - bmi calculator female

Fastidious respond in return of this difficulty with real arguments and telling the
whole thing about that.