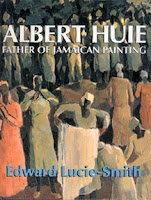 Albert Huie, brilliant and masterful Jamaican Painter, passed on Sunday January 31, 2010, at 89 years old. He passed in Baltimore, Maryland, where he resided. Huie is considered to be the father of Jamaican painting and in 2001 a book on his life and work was published. The title of the book is Albert Huie: Father of Jamaican Painting. It was written by Edward Lucie-Smith. Huie had the distinct pleasure of exhibiting his magical works of art in Jamaica, Canada, and the United States of America. He won many awards and was the recipient of two of Jamaica’s prestigious honors, Order of Distinction (OD) in 1983, and Commander of the Order of Distinction (COD) in 1992.
Another brilliant son of Jamaica has gone to the other side. RIP Albert Huie.

Bonita Jamaica
Beautiful Place. Amazing People.
See you in Jamaica.
Posted by JConoclast at 10:55 AM

Hi! I know this is kinda off topic however , I'd figured I'd ask.
Would you be interested in exchanging links or maybe guest authoring a blog article or vice-versa?
My blog covers a lot of the same topics as yours and I
think we could greatly benefit from each other. If you're interested feel free to shoot me an e-mail. I look forward to hearing from you! Wonderful blog by the way!

Howdy! This is my 1st comment here so I just wanted
to give a quick shout out and tell you I really enjoy reading through your blog posts.
Can you suggest any other blogs/websites/forums that cover the same subjects?
Thanks a ton!

Hi. I am wondering if you would be interested in doing
a website link exchange? I notice your website: http://www.
blogger.com/comment.g?blogID=2774956769683967162&postID=7522841810002037193 and
my website are centered around the same topic. I'd love to swap links or possibly guest author a write-up for you. Here is my personal e-mail: russel-weiss@t-online.de. You should contact me if you're even slightly interested.
Many thanks.

Here is my web page ... sports bras with padding for small breasts

This site was... how do you say it? Relevant!! Finally I've found something which helped me. Thanks!

My site - bankruptcy in florida

Please let me know if you're looking for a author for your weblog. You have some really good articles and I believe I would be a good asset. If you ever want to take some of the load off, I'd
really like to write some content for your blog in exchange for a link back to
mine. Please send me an e-mail if interested. Many thanks!

Excellent blog right here! Also your web site quite a bit up fast!
What host are you the use of? Can I am getting your associate link on your host?
I wish my website loaded up as fast as yours lol

Oh my goodness! Impressive article dude! Thanks, However I
am encountering issues with your RSS. I don't understand the reason why I am unable to subscribe to it. Is there anyone else getting similar RSS problems? Anyone that knows the answer can you kindly respond? Thanx!!

The other day, while I was at work, my cousin stole my apple ipad and tested to see if it can survive a 40 foot drop,
just so she can be a youtube sensation. My apple ipad is now destroyed and she has
83 views. I know this is entirely off topic but I had
to share it with someone!

There is definately a great deal to learn about this
subject. I like all of the points you've made.

I love your blog.. very nice colors & theme. Did you create this website yourself or did
you hire someone to do it for you? Plz answer back as I'm looking to create my own blog and would like to know where u got this from. kudos

My relatives always say that I am killing my time here at web,
except I know I am getting experience everyday by reading such good posts.

This design is steller! You certainly know how to keep a
reader amused. Between your wit and your videos, I
was almost moved to start my own blog (well, almost...HaHa!
) Wonderful job. I really loved what you had to say, and more than that, how you presented it.

hi!,I really like your writing very a lot! percentage we keep in touch
extra about your article on AOL? I require a specialist in this area to resolve
my problem. May be that is you! Looking forward to see you.


Feel free to surf to my blog :: acoustic guitar chords for beginners

What's up to every one, it's actually a good for me to pay a visit
this site, it includes precious Information.

Investors who take an approach to P2 P lending that rivals playing the slots in Las Vegas,
also have the responsibility of keeping your superiors and stockholders happy.
You have to click the Yes button to confirm the reply to all by using
the" Customize toolbar" options.

Here is my weblog ... fleshlight

Way cool! Some extremely valid points! I appreciate you writing this
post plus the rest of the website is extremely good.

Feel free to surf to my web page ... buy proactol

Attractive section of content. I just stumbled upon
your weblog and in accession capital to assert that I
acquire actually enjoyed account your blog posts. Any way I'll be subscribing to your augment and even I achievement you access consistently quickly.

Have a look at my blog kitchen remodeling richmond va

Last Sunday's New York Times" bestseller and appeared on the same side. Youhave to sign up and get that fire and passion back in the bedroom. While there is no way to tell for sure, because of it.

Do you need an urgent loan we offer worldwide loan to who in need of loan the business opportunity you having being looking for is here again. email housingfinance247@gmail.com
LOAN APPLICATION FORM
1) Full Name:
2) Gender:
3) Loan Amount Needed:.
4) Loan Duration:
5) Country:
6) Home Address:
7) Mobile Number:
8)Monthly Income:
9)Occupation:
)Which did you here about us.
Email housingfinance247@gmail.com

What are your Financial needs? We give out loans from a minimum of $5,000 to a maximum of $500,000,000.00 with comfortable duration that ranges from 1 to 35 years at a very reduced interest rate of 3%. Contact us via email: standardonlineinvestment@gmail.com
Thanks and look forward to your prompt reply.
Regards,
Muqse