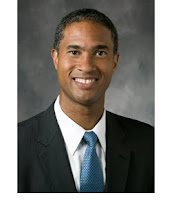 On July 28, 2008, NYU President John Sexton and Provost David McLaughlin named Peter Blair Henry – the Konosuke Matsushita Professor of Economics at Stanford University – as dean of NYU’s Leonard N. Stern School of Business. He will assume the deanship effective January 15, 2010.
A Rhodes Scholar; the leader of the Obama Transition Team’s review of the International Monetary Fund, World Bank, and other international lending agencies; and an economic advisor to governments from the Caribbean to Africa, Dean-designate Henry’s scholarship focuses on the impact of economic reform on emerging economies.

Read all about it: Here

Born in Jamaica, Peter became a U.S. citizen in 1986. His wife, Lisa J. Nelson, received her BA and MD from Yale University. She is a child psychiatrist and was a Glaxo Welcome Fellow of the American Psychiatric Association from 1995 to 1997. They have four sons: Christian Blair, Langston Alexander, Hayden Montgomery, and Harrison Elbert.

Posted by JConoclast at 7:29 AM

Congrats to a wonderful Jamaican. All
Jamaica is proud of you.

My boss, a graduate of NYU and I were discussing securing an intern to work for the summer.I went on NYU.com, I came upon the news (great news of the new dean, Mr. Peter Blair Henry, read his bio before I got to the end of I said to myself, this scholar has to be a Jamaica, and I was proven right. I am so proud and truly encouraged for all our fellow Jamaicans, I download every information I could find regarding dean Henry and is taking it home to share with my 13 year old. Congratulation, you make your mom dad and all Jamaicans very proud.

Write more, thats all I have to say. Literally, it seems as though you relied on the video to make your point.
You definitely know what youre talking about, why waste your intelligence on just posting
videos to your weblog when you could be giving us something informative to read?


Feel free to visit my homepage; bankruptcy attorney florida
My webpage: how to file for bankruptcy in florida

Pretty! This has been a really wonderful article. Thank you for supplying this info.


Visit my web page ... how to get followers on instagram

I could not resist commenting. Perfectly written!

Thanks for finally writing about > "Congratulations to Professor Peter Blair Henry"
< Liked it!

Quality articles is the key to invite the people to go to see the website, that's what this web site is providing.

Have a look at my page ... Best registry cleaners

Quality articles is the key to invite the people to
go to see the website, that's what this web site is providing.

Admiring the persistence you put into your blog and detailed information you present.
It's good to come across a blog every once in a while that isn't
the same old rehashed information. Fantastic read! I've bookmarked your site and I'm including your RSS feeds
to my Google account.

What host are you using? Can I get your affiliate link to your
host? I wish my website loaded up as fast as yours lol

I think the admin of this web site is in fact working hard in favor of his web site, as here every stuff is quality based data.

Greetings from Colorado! I'm bored at work so I decided to check out your website on my iphone during lunch break. I really like the info you present here and can't wait to take a look
when I get home. I'm amazed at how fast your blog loaded on my mobile .. I'm not even using WIFI, just 3G .

If you wish for to obtain a great deal from this article then you have to apply these methods to your won webpage.

Thanks for finally talking about > "Congratulations to Professor Peter Blair Henry" < Liked it!

I'm really enjoying the theme/design of your weblog. Do you ever run into any browser compatibility problems? A few of my blog visitors have complained about my site not working correctly in Explorer but looks great in Safari. Do you have any ideas to help fix this problem?

Hey there would you mind stating which blog
platform you're using? I'm looking to start my own blog
in the near future but I'm having a difficult time deciding between BlogEngine/Wordpress/B2evolution and Drupal. The reason I ask is because your design and style seems different then most blogs and I'm looking for something completely unique.
P.S Sorry for being off-topic but I had to ask!

I was curious if you ever considered changing the page layout
of your blog? Its very well written; I love what youve got to say.
But maybe you could a little more in the way of content so people
could connect with it better. Youve got an awful lot
of text for only having 1 or 2 pictures. Maybe you could
space it out better?

Check out my weblog :: australian shepherd puppies for sale

Hi, after reading this amazing post i am also cheerful to
share my familiarity here with mates.