Congratulations to Newton Marshall and the entire Jamaica Dogsled Team. Keep up the great work. 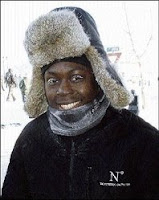 In what is being described as a major coup in extreme sports, a former horseback-riding guide has become the first Jamaican and the first black man to take part in the gruelling Yukon Quest dog race in Alaska.

Just like the 1990s blockbuster bobsleigh film Cool Runnings, Newton Marshall has crossed all boundaries in the freezing Alaskan outback, finishing 13th in the toughest dogsled race in the world.

"It felt like climbing Mount Everest because the race spanned four different mountain ranges and along with that type of terrain, came the wind that cuts like a knife," said the 25-year-old St Ann-born man who first saw snow two years ago.

The conditions were so brutal, he felt like quitting several times but, like a rawboned, courageous Jamaican, kept on.

i without a doubt adore your own writing kind, very unique.
don't quit and keep writing mainly because it simply just good worth to follow it.
impatient to see alot more of your own content articles, thankx :)

Wow! In the end I got a webpage from where I can really obtain
useful information concerning my study and knowledge.


My web blog :: diet plans that work
My site :: diets that work

Awesome blog you have here but I was curious
if you knew of any message boards that cover the same topics talked
about here? I'd really love to be a part of community where I can get responses from other experienced people that share the same interest. If you have any suggestions, please let me know. Cheers!

Here is my web-site ... diet plans that work
my web site > diets that work fast

No matter if some one searches for his required thing, therefore he/she desires to be available
that in detail, thus that thing is maintained over here.

Check out my blog - declaring bankruptcy in florida


Cleanliness is one of the important things and attention must be paid to the constant cleaning of the place and care in order to have a house free from dust and dirt, as having a completely clean place is one of the things that every housewife seeks for and our company is used
شركة تنظيف بعنيزة