Marley For Her Majesty 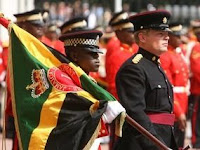 The Queen was serenaded with Bob Marley yesterday, as the Jamaican regiment took over the Queen's Guard.

The regiment's 34-strong band attracted a crowd of thousands outside Buckingham Palace, and they played some traditional military music, as well as some Calypso songs and the famous Bob Marley hit, 'One love'.

The British brass band mostly stuck to more traditional songs, with the exception of the Star Wars theme tune.

The ceremony, in which the Queen's guards are exchanged at 11.30, is always a popular event with tourists, but this time it was a particularly special sight.

Mrs Bedford, an Australian visiting Britain, said: "Tourists love coming down for the changing of the guards, and we enjoyed something different".

Many Jamaican members of the crowd were waving their national flag to celebrate their regiment's prestigious honour.

The Jamaican High Commissioner to the UK seemed to share their enthusiasm when he said: "This is a proud summer for Jamaicans in the UK. I urge Londoners and Jamaicans to unite and enjoy together the spectacle of
these remarkable men, each of whom is a soldier and a musician, whose colourful uniform together with their musicianship captures the pride and glory of the Jamaican Defence Force, and indeed our wonderful country".

However, Jamaican pride may be overshadowed by critics who claim that the Jamaican Regiment are being used for the Queen's Guard because the Coldstream Guards, who usually fulfil the duty, may be deployed to Afghanistan later this year.

These allegations have been denied by the Ministry of Defence. A spokesman called the event a "routine exchange", and pointed out that the Jamaican regiment has fulfilled this duty before, eight years ago.

The regiment will also guard the Queen at Windsor Castle, which is thought to be her favourite home, at the end of July.

Their band will be playing in St James's Park on August 1st, to celebrate Jamaica's emancipation day, and on August 6th, which marks Jamaica's 35th year of independence from Britain. They will also appear at Notting Hill Carnival.

Meanwhile, Brits can be safe in the knowledge that the Queen will be well protected. Col Derek Robinson, commander of the Jamaican Regiment, said:

"Training has been intense and the best of my men are looking forward to the honour of guarding Her Majesty".

Posted by JConoclast at 6:51 AM

Unquestionably believe that which you stated. Your favorite reason
seemed to be on the net the easiest thing to be aware of. I say to you,
I certainly get annoyed while people consider worries that
they just don't know about. You managed to hit the nail upon the top and defined out the whole thing without having side effect , people could take a signal. Will likely be back to get more. Thanks

Look at my web-site - good diet plans for women

I read this paragraph completely regarding the comparison of newest and previous technologies, it's awesome article.

My website how much should i weigh for my age

Remarkable! Its in fact awesome paragraph, I have got much clear
idea on the topic of from this post.